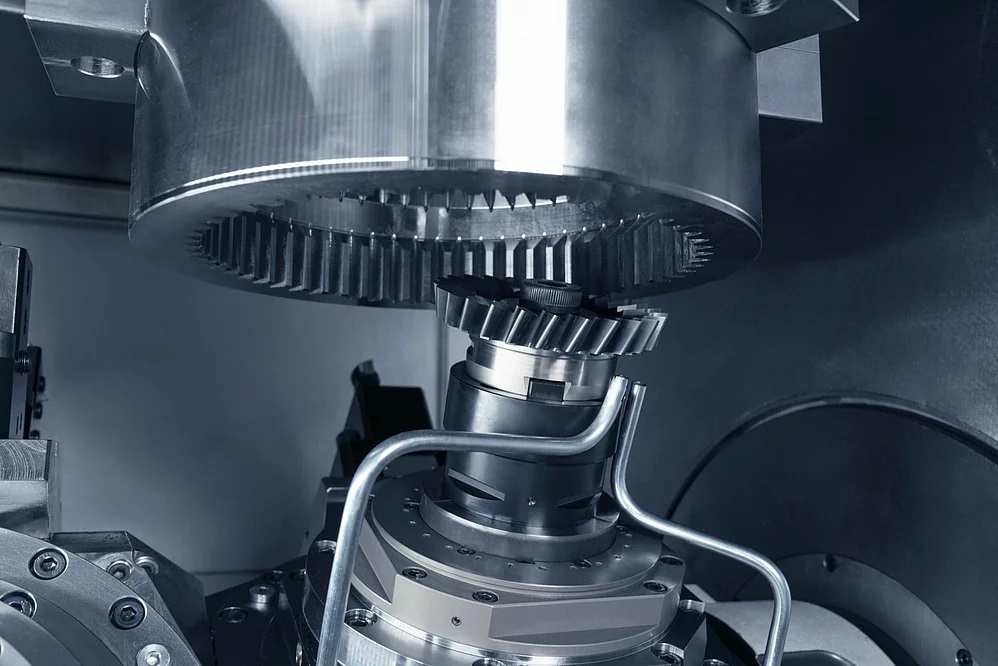 For many gear manufacturers, power skiving is getting very interesting, and not without reason, since the technique is much faster than shaping and more flexible than hobbing and broaching. However, for many years, the technique was considered quite complex. Against this backdrop, the new development by EMAG is a game changer. Firstly, with the VSC 400 PS, the operator makes only a few data entries, making power skiving very simple. You no longer need to be a gear tooth expert. Secondly, the VSC 400 PS can be equipped with up to four power skiving tools and six turning tools. As a result, the user can produce even complex components in a single clamping operation that is fast and controlled. What are the strengths of this concept?

Internal and external gear teeth production is omnipresent – for example, in the field of electromobility, in all planetary gears, or in hydraulic applications, gear toothed components and many ring gear wheels are indispensable. For production planners, the task is not easy: Which technique should be used for each case? Depending on the type of component, gear shaping is frequently a good choice, but it is rather slow. The alternative, hobbing, requires a relatively large overrun at the component and cannot be used for machining internal teeth. Broaching, on the other hand, cannot be used to create interfering contours. “When all this is taken into account, power skiving is frequently the best solution – in particular for internal teeth,” explains Daniel Nille, head of technology development at EMAG Maschinenfabrik. “It is significantly faster than shaping and does not need as much overrun as hobbing”.

Up to 4 different power skiving tools in use

The machine manufacturer from southern Germany has specialized in the new gear cutting technique for more than 10 years, and many customers count on EMAG solutions. Currently the specialists are taking a decisive technological step forward: The new VSC 400 PS power skiving machine not only combines skiving and rolling processes but can also hold up to four different power skiving tools on two spindles, plus up to six turning tools. This has far-reaching benefits for any user – the combinations make diverse solutions possible:

For example, it is possible to perform roughing (e.g., with indexable inserts) and finishing (e.g., with a carbide tool) in quick succession, in a single clamping operation on a single machine. This means the user saves investment costs and the total machining time for a component is minimized.  Alternatively, the machine with its two spindles, which can hold up to two power skiving tools each, can also produce up to four different types of external and internal teeth using four tools. A big advantage is that the gear tooth positions are perfectly matched to each other at the end of cycle, made possible by the single clamping operation and no change-over. The customary step of measuring the first tooth cutting pass (prior to cutting the second) is no longer needed.The combination of “pre-turning and power skiving” is just as efficient, as the single clamping operation on the workpiece ensures that the concentricity is perfect, while the cycle times are minimized.

Additionally, users benefit from a large range of technical features offered by the VSC 400 PS, which is designed for components with a maximum diameter of 340 mm and a maximum height of 420 mm. Direct drives in the main and milling spindles keep the axes perfectly synchronized during the machining processes. Additionally, the very rigid B-axis allows a large variety of axis crossing angles – this is essentially the setting angle of the tool, which is always tilted slightly with respect to the component. It is this tilt that makes the actual cut possible. Usually, a value between 15 and 25 degrees is used here, but EMAG has also successfully implemented power skiving processes with an angle up to 45 degrees. Each time the tool cuts into the workpiece, a small amount of material is removed – the process is as fast and precise. Additionally, EMAG’s well-known standard qualities provide great benefits. The symmetrical, non-cantilevered design facilitates rigidity, which in turn improves the precision at the tool. Furthermore, hydrostatic guides dampen the vibrations. This results in much longer tool life, for example.

The operator interface of the machine is of great importance, because power skiving such a sophisticated technique with many potential settings. However, these are largely omitted on this EMAG machine with intuitive parametric programming. “From the beginning, our goal was to massively simplify the entire operating process on the machine,” says Nille. “Now, the operator needs hardly any knowledge about the technique. In principle, they only must enter the desired tooth cutting values for the component, the values from the tool data sheet and the cutting values. And our intuitive operator interface massively simplifies this task. The machine handles the rest. It independently calculates the entire machining program for the power skiving process. Power skiving could hardly be easier”. It is also possible to make diverse corrections just as easily – for example, based on measuring values of finished components. During the entire process, the operator is supported by interactive images and automatic safety queries.

A similarly efficient option is IoT integration of the machine, because EMAG already has a complete IoT ecosystem called EDNA (which stands for EMAG DNA). At the heart of this system lies a powerful industrial PC, which records, aggregates, and analyzes the data with the aid of the EDNA CORTEX software. Subsequently the HEALTH CHECK can be used, for example. It assesses the condition of the machine by analyzing regular vibration measurements. Experts then check the results. This combination of EMAG’s expertise and machine learning provides an in-depth look at the state of wear.

Users can lower their investment costs

All that remains to consider is the area of application: Where are the strengths of the VSC 400 PS of greatest benefit? “Basically, wherever high-quality internal and external gear cutting is needed, although our machines have been mainly designed for flanged gear components,” emphasizes Daniel Nille. As a rule of thumb, the more turning operations or different power skiving processes must be performed on the component, the more effective the EMAG concept with up to 4 toothing tools and 6 turning tools will be. On the one hand, the component quality is improved because the toothing positions are perfectly aligned with each other. On the other hand, users can reduce their investment costs and perform several operations on a single machine. For example, the gear teeth can directly be deburred in the same clamping operation. With the VSC 400 PS, this is easy to do.