Since 1995, DESMA has been established on the Indian market with its own production plant and has thus contributed significantly to the development of the Indian rubber industry. With over 100 employees, DESMA offers a wide range of machines, from 250kN - 7000kN clamping force for various applications. With an in-house mould and cold runner block manufacturing capabilities, complete turnkey project solution, process automation as per the requirement are supplied from one source, made in India, as is customary at DESMA.

The wide range of machines also covers special applications, such as special machines for the production of e.g. bladders for the tyre industry up to large machines for the production of battery seals for electric mobility. In addition to machines and moulds, engineering services for process development are also offered. In constant exchange with the main plant in Germany, current trends and developments are quickly made available for the Indian market. 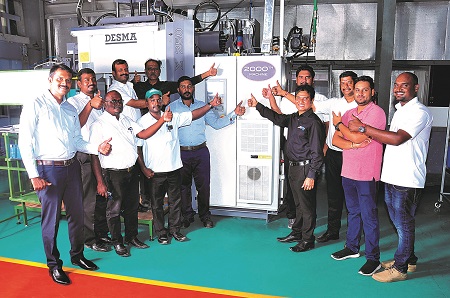 The 2000th injection moulding machine was recently delivered to M/s Suja Shoei Industries in Tindivanam, which also has a joint venture with the Japanese M/s Shoei Cooperation.  The 2000th machine was one of the 5 vertical machines of the SIGMA 250 series installed at the same time. The products produced on DESMA machines are exported to more than 20 different countries. DESMA celebrated this machine handover with a small ceremony together with the customer team led by Mr. Sudhakaran.

The Indian market has developed very dynamically in the last two decades into a very important supplier market for the global automotive industry. In addition to the globally active international groups, new globally active Indian producers have emerged from this rapid development, which in the meantime have their own production sites all over the world.