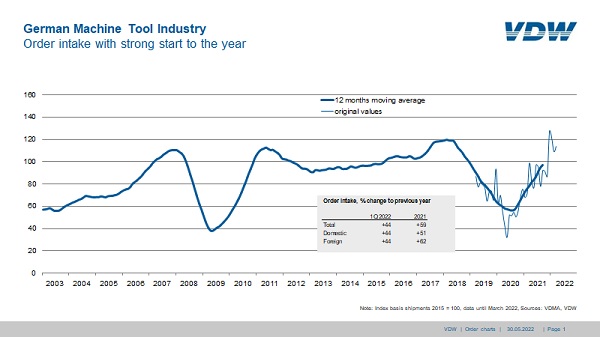 Orders received by the German machine tool industry in the first quarter of 2022 were 44 per cent up on the same period last year. There was a 44 percent increase in orders both from within Germany and from abroad.

"Orders for our industry continued to flow in during the first quarter of this year," commented Dr. Wilfried Schäfer, Executive Director of the VDW (German Machine Tool Builders' Association), Frankfurt am Main. "They were only 8 percent below the figures posted in the record year of 2018," he continued. However, the effects of the Russia-Ukraine war are expected to become more pronounced in the coming months, he said. This is evidenced firstly by the most recent growth rates, which have been significantly lower. Secondly, the supply bottlenecks remain the biggest problem and are far from being resolved. "This issue will be with us for quite a few months," Schäfer fears.

Supply bottlenecks are also the reason why production continues to lag far behind orders. In the first quarter, production rose by a disproportionately low 6 percent. In response, the VDW has lowered its production forecast for the current year from 14 to 8 percent growth.

"At present, the new machines are simply ending up in storage, as many of them cannot be put into operation because of missing parts," explained Schäfer. However, these machines do not appear in the production figures until they are loaded onto trucks or ships. China is currently the source of a great deal of uncertainly. The lockdowns in numerous major cities and industrial centers are preventing customers from taking delivery of machines, and service personnel from traveling to their customers.

As with production, there is currently little momentum behind exports. There was a slight increase of 1 percent in the first quarter. Europe and the Americas have posted slight declines of 2 percent and 1 percent respectively. Asia has grown by 8 percent, with Central and South Asia and Southeast Asia growing much more strongly than East Asia. At 4 percent, exports to China, the largest sales market, grew only moderately at the beginning of the year. China accounts for a good 19 percent of German exports, while the US market takes a much smaller share of 13 percent. Exports to the USA fell by 6 percent in the first quarter. Italy ranks third among the ten most important sales markets, accounting for both an increase and also a share of 6 percent. After the poor performance of the previous year, business with Switzerland bounced back, with 70 percent growth in the first quarter. This returns the country to 4th place in the rankings. Exports to Austria were lower compared with the very strong first quarter of 2021. Exports to Poland were also down slightly on the previous year's level. The Netherlands figures remain buoyant, with the country taking 11 percent more machine tools in the first quarter than last year. France has continued its downward slide, falling by 18 percent. Mexico and Turkey complete the top 10, posting sizeable double-digit growth rates of 27 and 26 percent respectively.

Total imports have grown by 20 percent, driven by Switzerland, Japan and China, whose shipments have seen significant increases.

"All in all, the economic uncertainties facing our industry remain considerable going forward," said VDW Executive Director Schäfer, summing up. "A prolonged war in Ukraine, further soaring prices for energy, logistics and raw materials, and a complete embargo on oil and gas supplies from Russia would have a significant impact. Nevertheless, the high levels of orders currently on the books are easing the situation. There is therefore a chance that some of this year's downturn in growth will turn into sales figures in the coming year. International machine tool consumption is estimated to rise by 10 percent this year, which could also help matters," Schäfer concluded.