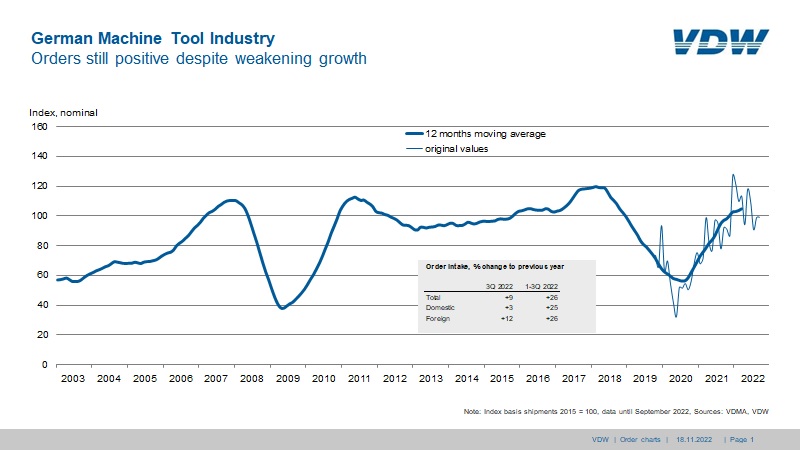 Orders received by the German machine tool industry in the third quarter of 2022 were 9 percent up on the previous year's figure. Orders from Germany rose by 3 percent whereas those from abroad were up by 12 percent. Demand rose by 26 percent in the first nine months of 2022. Domestic and foreign orders contributed in equal measure to this, accounting for growth of 25 and 26 percent respectively.

"Our industry's orders have held up well so far, despite all the adverse factors. Although the growth is clearly slowing, both September and the third quarter as a whole are positive," says Dr. Wilfried Schäfer, Executive Director of the VDW (German Machine Tool Builders' Association), Frankfurt am Main, commenting on the result. "However, there was an 8 percent increase in producer prices in the machine tool industry in the third quarter. The effect of this was that earnings stagnated on a price-adjusted basis. As we are seeing everywhere, inflation is eating away at our growth," Schäfer continues. Orders for the year as a whole are nominally only 7 percent below the record volume posted in 2018. This record level has been matched abroad, however the figures from the domestic market are one fifth below it.

At the same time, capacity utilization rose to just over 90 percent this October. "The supply bottlenecks are now easing slightly, it seems," Schäfer says. This is evident from sales, which have also increased by a gratifying 10 percent in the first nine months. Machining is the larger sector in the machine tool industry, and with its heterogeneous customer base it is outpacing the forming sector here, posting a 17 percent increase. Forming is dominated by the pressing sector; it is often used in large-scale projects and is characterized by less prominent cyclical swings.  Sales here are down 6 percent in the first three quarters of the year. However, this can be explained by the strong base from the previous year. Forming technology grew by a fifth in 2021, while for machining the figure was only 3 percent.

The sector expects to see orders cool noticeably in the fourth quarter. Germany and Europe in particular are lagging behind, while Asia and America, which have been little affected by the energy crisis, are expected to perform more solidly. "Nevertheless, we will finish the year with overall growth in production," says Schäfer, summarizing the outlook. The sizable backlog will ensure that production remains high, as it takes time to process the orders, he explains.

Background
The German machine tool industry ranks among the five largest specialist groupings in the mechanical engineering sector. It provides production technology for metalworking applications in all branches of industry, and makes a crucial contribution towards innovation and enhanced productivity in the industrial sector as a whole. Due to its absolutely key role for industrial production, its development is an important indicator for the economic dynamism of the industrial sector as such. In 2021, with an average of 64,900 employees (firms with more than 50 staff), the sector produced machines and services worth around 12.7 billion euros.