A novel approach to rubber recycling could see end-of-life tyres repurposed into concrete for residential constructions as new research from the University of South Australia (UniSA) shows that it can provide an economically viable and sustainable alternative to conventional concrete. Working with RMIT University, researchers demonstrated that crumb rubber concrete is a safe, green alternative for residential construction in Australia, proving a much-needed new market for end-of-life tyres.

Lead researcher, UniSA’s Professor Julie Mills, says that this research is the first to practically demonstrate and construct the new crumb rubber concrete mix in the field, literally taking the work from lab to slab.

Globally, approximately 1.5 billion vehicle tyres are discarded each year. Less than one percent of these are reused, with the rest being unaccounted for or dumped in landfills. In Australia about 51 million tyres end up in landfills, stockpiles or dumped on mine sites. By recycling end of life tyres in concrete, valuable natural resources can be conserved, and the current tyre landfill problem can be partially resolved. Co-researcher Dr. Osama Youssf says that accumulation of end-of-life tyres is a global and growing problem for the global environment. “Rubber tyres are not biodegradable and lead to unstable landfills, breeding grounds for mosquitoes from trapped water, polluted surfaces and toxic groundwater. They pose a significant risk for toxic fires. In Australia, two thirds of tyres end up in landfill. Such continuous waste production and disposal is entirely unsustainable, which is why we have been investigating alternative recycling options,” Dr Youssf says. “

In the introduction to the group’s paper entitled “Practical Application of Crumb Rubber Concrete in Residential Slabs”, the researchers said that while there is extensive data now available for the performance of crumb rubber concrete (CRC) in laboratory mixes, it is essential to understand whether satisfactory performance can be replicated in real-world structures. This is particularly the case for the area of residential construction, which is a sector that is sometimes characterised by fairly average outcomes due to a sometimes-low skilled workforce operating with minimal supervision.

To replicate a real-world situation, CRC research has been moved from “the lab to the slab.” Two large-scale (4 × 8 m each) reinforced concrete residential footing slabs were constructed. One was cast with CRC and the other with a standard residential mix of conventional concrete (CC). In addition, two reinforced concrete residential ground slabs of different dimensions were constructed out of CRC and CC mixes to assess abrasion resistance. These ground slabs were poured in high traffic entrances of a civil engineering laboratory. All mixes were provided by a commercial ready-mix company and the construction was undertaken by an experienced footing contractor. A large range of factors have been investigated and compared. 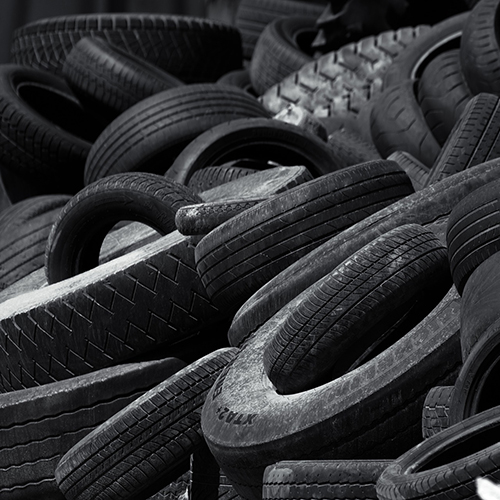 Those related to construction requirements, included the effect of using rubber on concrete mixing, delivery, workability, pumpability, ease of surface finishing, and curing. The contractors reported easy screeding and less physical effort to do so, with no difference reported when finishing the concrete surface when using a concrete power trowel for footing slabs. Other factors that were investigated included: fresh and hardened density, compressive strength, modulus of elasticity, shrinkage, carbonation, chloride ingress, abrasion resistance, rising damp, and corrosion.

A future in residential construction

The research investigated the design and processing of various crumb rubber concrete mixes for use in residential constructions, assessing its constructability, bond strength, durability, and flexural strength. “We found that reinforced crumb rubber concrete (with up to 20%  sand replacement by volume) is superior to conventional concrete in some ways, with higher impact resistance, toughness and ductility, a higher damping ratio, better thermal and acoustic insulation, and a lighter weight,” according to Dr. Youssf.

With respect to pumping, screeding, or finishing the concrete surface using a power trowel, contractors also reported no difference between using the crumb rubber concrete and conventional concrete, saying that the crumb rubber mix actually required less physical effort across all aspects.

- This article also appears in the International Plastics News for Asia - April issue. Click here to read the e-zine.