Clariant has launched a major global campaign to reduce the climate change impact of nitrous oxide (N2O). Drawing on decades of catalyst research expertise, the company has developed the EnviCat N2O-S catalyst, which is proven to remove up to 95% of N2O generated as a by-product of nitric acid production*[1]. Clariant is now offering a free fill of EnviCat N2O-S to 10 nitric acid producers who do not have N2O off-gas treatment in place. Through the campaign, the company intends to help avoid greenhouse gas emissions equivalent to several million tonnes of CO2 every year.

Of the approximately 500 nitric acid plants operating globally, more than half run without N2O abatement, mostly in regions without applicable emission control regulations*[2]. Clariant now aims to tip the balance towards more sustainable production processes. The company is offering a free first fill of EnviCat N2O-S catalyst to up to 10 nitric acid producers who currently do not use an N2O abatement catalyst. 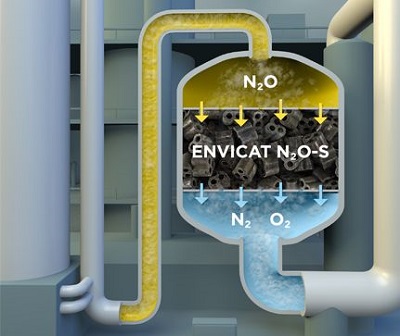 Over 60 million tonnes of nitric acid are produced annually around the world, mainly for manufacturing fertilizers. Despite its importance for our food chain, the chemical has a major drawback: its production emits N2O, which is extremely harmful for the climate. The greenhouse gas remains approximately 114 years in the atmosphere and thus impacts global warming around 300 times more than CO2*[3]. Annually, N2O emissions from the production of nitric acid and its derivative adipic acid are equivalent to about 100 million tonnes of CO2*[4].

The technology to avoid the serious impacts of N2O emissions is already available: Clariant’s EnviCat N2O-S catalyst converts up to 95% of the N2O formed during nitric acid production into the harmless substances oxygen and nitrogen. Besides climate benefits, the catalyst can also slightly increase nitric acid yield by improving the efficiency of the ammonia oxidation process. Designed as a convenient “drop-in” solution, the catalyst is easy to install with almost no engineering modifications.