Automation made very easy: with the new ReBeL, igus now presents a plastic cobot that weighs only ten kilograms. Together with low costs, low maintenance and simple operation, the ReBeL makes new innovative ideas in service robotics feasible for smaller companies and start-ups - from installed use on agricultural drones up to mobile support as household help.

In nursing, in dispensing machines, in the field or in factories, collaborative lightweight robots can help automate monotonous tasks. To enable interactive service robotics concepts to be implemented quickly and inexpensively, igus has developed the new generation of the ReBeL. The lightweight plastic robot has a fully integrated tribo strain wave gear with motor, encoder, force control and controller. Electronic components in the fully integrated strain wave gear allow human-robot collaboration to be possible (HRC). This is because the encoder technology enables forces and torque to be determined and limited via the motor current in combination with the angle measurement. For this, igus relies on a double encoder, in which a measurement is carried out in front of and behind the joint. This detects forces and torque levels and responds accordingly. 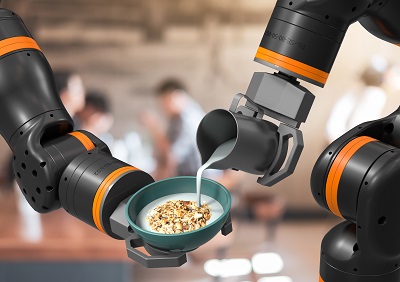 Plastics is a game changer in automation

The use of plastic in the ReBeL results in an extremely compact, lightweight design. With a net weight of less than ten kilograms, the robot is the lightest cobot on the market. Its payload is two kilograms and it has a reach of 700 millimetres. Thanks to the low starting price, under 4,000 euros including control system, the ReBeL can even be used in areas where the use of robotics was not previously worthwhile. Many new innovative ideas are now becoming feasible: from use in an automated guided vehicle system to use as a bartender. "Many young companies are currently showing what is possible with low cost automation," says Alexander Mühlens, Head of Automation Technology at igus. "An example, in the textile industry, as at ADOTC. Here an igus articulated-arm robot undertakes the automatic feeding and removal of textile pieces to and from the sewing machine. Since energy prices for robots are comparable worldwide, this automated product is worthwhile."

In addition to the price, igus also lowers other entry hurdles such as complexity. For example, the new ReBeL, like the other articulated-arm, delta or linear robots from igus, can be tested and operated very easily. For this purpose, igus offers free control software. It is easy to define and simulate the movements of the robot quickly. This saves companies commissioning costs and makes them less dependent on integrators. Those who require further support can also make use of the new RBTXpert service, which helps in the selection of the right low cost automation solution. After a free online consultation with the RBTXpert, the suitable automation system can be tested. Based on the tests, the RBTXpert can then quote the customer with a price. This is made possible by the low cost automation marketplace RBTX.com where components, hardware and software from different manufacturers can be found. Among them are various robot kinematics, cameras, GUIs, grippers, power electronics, motors, sensors and control systems. In line with the "Build or Buy" approach, customers can configure individual components for their robot or ready-made robotics solutions and order them directly.